Some answers to some common Christmas Questions...

The birth of Jesus is only recorded in two of the four canonical Gospels – Matthew and Luke. The earliest written gospel was Mark’s, composed around 70-80CE in southern Syria. Mark does not include any record of Jesus’ birth. The silence of the earliest Jewish-Christian authors about the miraculous birth of Jesus seems strange given that they were trying to convince their readers that Jesus was divine. It was almost inevitable, in an ancient context, that stories of a miraculous birth for Jesus would have appeared. The narratives of the heroes in the Hebrew Bible make a miraculous birth almost an essential pre-requisite for anyone who wants to have a significant role in Israel’s history.

The gospel of John, likely written in northern Syria sometime in the first decade of the second century, asserts that the Word existed from the beginning of creation. This gospel claims that Jesus was the son of Joseph (John 1:45) and also does not include any birth story.

Thus, only the gospels of Matthew and Luke refer to the birth of Jesus. Matthew was likely written in northern Palestine sometime in the late 80's or early 90's, and Luke in Asia Minor sometime during the late 90's, both about a century after his birth.

Are the stories about Jesus’ birth historically accurate?

During the celebration of Christmas, familiar images are recalled in hymns and Scripture about the birth of Jesus. In the minds of most people the appearance of herald angels, shepherds abiding in the fields, the star of Bethlehem, the Virgin Mary giving birth in a stable and the adoration of the Magi, have all been melded into one Christmas story. They form an important part of the Catholic Christian tradition and a wonderful pathway for entering into the mystery of the Incarnation.

The two infancy narratives provide distinct and at times contradictory stories of Jesus' birth. While most scholars would concede that that there is very little in the infancy narratives that are historically accurate, these stories are viewed by Christians as stories of faith, rich in symbolism and metaphor. The Gospels were written by men who were among the first to have the faith and wanted to share it with others. Having known in faith who Jesus is, they could see and make others see the traces of his mystery in all his earthly life. From the swaddling clothes of his birth to the vinegar of his Passion and the shroud of his Resurrection, everything in Jesus' life was a sign of his mystery. His deeds, miracles and words all revealed that "in him the whole fullness of deity dwells bodily." His humanity appeared as "sacrament", that is, the sign and instrument, of his divinity and of the salvation he brings: what was visible in his earthly life leads to the invisible mystery of his divine sonship and redemptive mission. (Catechism of the Catholic Church #515).

It is important for students to know these stories both from the standpoint of stories of faith but also from the standpoint of textual analysis. There is no Scriptural text without a context. It is useful for students to be able to identify the similarities and differences in the two birth stories and to explore why gospel writers choose to include and omit particular details. As students’ understanding develops they need to move beyond a literal interpretation of these accounts to more inferential and evaluative levels of understandings. Not withstanding this, it is also important that students understand how these narratives are interpreted within the Church in its life of faith.

Although we shall never be sure about the exact circumstances of Jesus' birth, we do know that about two thousand years ago, there was born in rural Palestine an extraordinary Jew who was to change profoundly the course of human history. For faithful Christians, Jesus Christ is the Incarnation of God the Father and the central figure of the Christian story.

Why is Christmas celebrated on December 25?

Dating December 25 as the birthday of Jesus is known to have gained popularity only by the mid- fourth century in order that Christians could have an alternative to a popular pagan festival at this time of year. December 25 was the winter solstice according to the old Julian calendar, and it was on that day that Mithraism, a chief rival to Christianity, celebrated the birth of the god, Mithra.

How do Catholics understand the Virgin birth?

The doctrine of the virgin birth of Jesus, so central to the traditional Christmas story, was not part of the teaching of the first Christians, whom it should be remembered, also remained within the Jewish faith (Luke 24:52-53). The apostle Paul makes no reference to the virginal conception by the mother of Jesus when speaking of Jesus' origins and divinity. His epistles were written during the 50's CE and predate all of the four gospels. Although Paul never met Jesus (who died about 33 CE.), it seems he personally did know James, the brother of Jesus. Yet despite this eye-witness link to Jesus, Paul apparently knows nothing of the virgin birth, for he states only that Jesus was "born of a woman" (Galatians 4:4) and was "descended from David, according to the flesh" (Romans 1:3), thereby implying a normal birth. The doctrine of the virginal birth is still an integral part of Catholic belief and teaching and has developed through the centuries: The deepening of faith in the virginal motherhood led the Church to confess Mary's real and perpetual virginity in the act of giving birth to the Son of God made man. In fact, Christ's birth "did not diminish his mother's virginal integrity but sanctified it." And so the liturgy of the Church celebrates Mary as Aeiparthenos, the "Ever-virgin". (Catechism of the Catholic Church, 499)

Why are Jesus’ ancestors included in the Gospels?

The authors of Matthew and Luke attempt to trace the ancestry of Jesus back to the Jewish king David. It was from the royal house of David that the messiah was expected. However, upon examination, the tables of descent in these gospels contain some contradictions. For example, the two gospels cannot agree on the lineage of Joseph, the father of Jesus. Matthew has 28 generations between David and Jesus, while Luke has 41 for the same period of about 1,000 years. In Matthew's gospel, Joseph's father (i.e. Jesus' grandfather) is said to be Jacob, while in Luke it is claimed that he is Heli. Regardless, the birth narratives need to be understood as faith accounts. As such it is very important for the writers to show that Jesus was descended from the house of King David and that he in fact was born in Bethlehem, the birthplace of David.

Did the census take place? 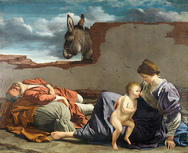 Matthew claims that the birth of Jesus occurred during the reign of Herod the Great of Judea, whom we know died in 4 B.C. Luke also tells us that Jesus’ birth happened during Herod's reign. Luke even adds what appears to be detailed and historical evidence of the period. He writes that Jesus was born during a census or registration of the populace ordered by emperor Augustus at the time that Quirinius (Cyrenius) was Roman governor of Syria (Luke 2:1-3). The census is unlikely to he historically accurate; Quirinius was not governor of Syria and Judea during Herod's kingship. Direct Roman rule over the province of Judea, where Bethlehem was located, was not established until 6 C.E. In other words, ten years separated the rule of Quirinius from Herod. Further, there simply wasn’t the governmental structure required to run and support such a census. From an educational viewpoint, the census is best understood as a literary device used by the writers to ensure Mary and Joseph were located in Bethlehem for the birth of Jesus.

What about Jesus’ home town, Nazareth?

As for the hometown of Jesus' parents, neither gospel can agree where it was. Matthew has them residing in Bethlehem in Judea, while Luke says they lived in Nazareth in Galilee. Incredibly, Luke has Joseph take his wife Mary, in the last stages of her pregnancy, on an arduous four-day journey by foot to Bethlehem because of the census. This assumes that the "census" (i.e. a registration which was to assist in levying a poll or a property tax) was conducted in a most peculiar way. According to Luke, illiterate peasants had to somehow trace their tribal and family heritage back to their ancestral birthplace and then to report there for registration. The confusion and mass movement of population this would entail was, in fact, contrary to the sensible Roman practice of registering men (women had no political or property rights) for the head tax at their current dwelling place or the chief town of the local taxation district. As stated previously, it was important, however, for the authors of both these gospels, that Jesus be born in Bethlehem because it was the city of David from where, it was prophesied, Israel's ruler would come (Micah 5:2).